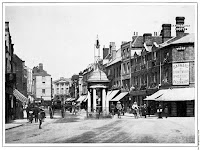 He was born in Chelmsford, a small but thriving town in Essex, England with seemingly its only claim to fame being that King Henry VIII had built Beaulieu Palace nearby for his second wife, Anne Boleyn,  who eventually lost both his favor - and her head.

Although record keeping during the late 16th century wasn't always accurate, whatever records there were confirmed that Daniel was the child of Sir John Llewellyn (a knight of the realm who died when the boy was only 15 years old), and Lady Carole Larson (who died at age 50).  Their early deaths resulted in a very young Daniel inheriting both the estate and his title as a knight (an honor passed down through the male Llewellyn line).

While managing the estate and caring for his mother, Sir Daniel probably dreamed of the day when he would be financially able to experience the world outside his tiny home town. Although his daily expenses were probably covered through selling or trading cattle and produce from his properties, the only real cash he had was a stipend he earned as the Sheriff of Chelmsford.  In fact, it wasn't until three years after his mother's death that he was finally in a position to turn his plans for making the long trip across the sea into reality.  Those plans included recruiting neighbors and relatives to manage the estate while he changed hats from lord of the manor in England to an indentured slave in America.

Finally after all the necessary arrangements and plans had been made, 33 year old Daniel signed a life-changing contract with the captain of a ship preparing to sail to America. The contract stated that in return for his passage, he would allow himself to be sold to Captain William Perry, a former indentured servant himself, for a specified period of time. 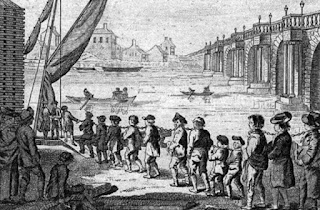 The trip itself was long and arduous, but it was only after he reached his destination that his dreams crashed into an even worse reality!  How could this former lord of a manor have ever imagined that he would be marched off a ship in chains and pushed into a line being formed to march to Buckland Plantation in Gates County, North Carolina (the aging and deteriorating mansion still stands today)?


And so it was that Daniel Llewellyn began his new life in a new country -  not as Sir Daniel,  but as a slave, or "headright" (a system created to deal with the constant demand for workers to tend the newly emerging tobacco fields. Although, it was often considered a form of slavery, it also provided hope for desperate people who had arrived in America with no resources, while addressing the growing labor crisis.)

It was only four years after arriving at Buckland that Captain Perry died and his son, Henry, became Daniel's new master.  During his years with the Perrys, one has to assume that he used his time wisely by taking every opportunity to learn about the advantages of settling in Virginia vs North Carolina and  best vs worst planting methods.

Now that he was in his early forties, Daniel realized that time was not his friend.  So, after finally completing his obligation to the Perrys and acquiring both the patents for 856 acres of land and money owed him, he was free to head north to Virginia where he believed endless opportunities awaited him.

The area he chose was located near the Shirley Plantation on the "upper branch of Turkey Island Creek" in Charles "Shire", Virginia (a term created by King Charles 1 of England, who ordered that eight "shires" be created to serve as a system of governance in the colony.  After proving their effectiveness, the "shires" eventually became self-governing "counties" and - many years later - the foundation for what is now the United States. 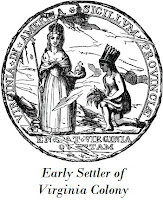 During those first years in Virginia,  Daniel had come to treasure his deep friendship with Robert Hallom, a man who had also begun his life in America as an indentured servant and who, by 1636, had acquired 1,000 acres of fertile land.  Ironically, that acreage was adjacent to land already being cultivated by John Price, whose wife, 21 year old Anne, and their three children had traveled to America on the same ship as Robert Hallom in 1620.

Since Robert was considerably  older than Anne, she probably had felt comfortable talking with him and accepting his non-threatening friendship during that long voyage. He might have even assured her that since he would be living nearby, he would be there for her if she ever needed help.  Neither of them could have known that only four years later, her husband would die and she would be forced to call on Robert's friendship and support.  Especially scary for 25 year old Anne must have been the realization that if she failed to maintain what her husband had started, she would be forced to sell everything and return to England.


The next few years had to have been  arduous and, at times, scary for the  widow and her children.  But she wasn't totally alone.  She had her neighbor and long-time friend, Robert Hallom, who always came through when she needed him.  Despite their age difference, they had a deep and lasting friendship which eventually led to marriage and three more children. 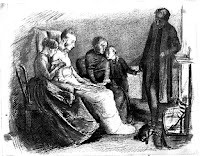 But tragically, the couple had very little time together before 41 year old Robert's health began to deteriorate, thus forcing him to spend most of his time in bed and unable to care for either his family or their property.  Although he and Anne did have a son,  all their children were too young to do much more than play with their toys (as a matter of fact, their son, Robert Jr., was sent to England to live with his aunt and her husband after his father's death).

Upon learning about how desperate life had gotten for Robert and Anne, Sir Daniel Llewellyn made an offer the Halloms couldn't – and wouldn't – refuse.  He offered to take over the management of both the Hallom and Price properties which were located near Turkey Island Creek in Henrico "Shire". They probably didn't have to think very hard before accepting his generous offer, since he had already proven himself over the years to be a capable, responsible and honest man -  and the alternative was a complete loss of everything for which they had worked and sacrificed.

It probably came as no surprise to anyone in the neighborhood that only a couple of years after Robert's death, Daniel and Anne married and added three children to the six that Anne had given birth to in her previous marriages.  Probably life on three plantations instead of one didn't change all that much for Daniel who continued to manage not only the plantations in Charles City County and Henrico County, but also the Virginia interests of a number of  Halloms  till living in England.


Adding to those responsibilities, this man who originally had answered to the name Sir Daniel Llewellyn, eventually became known as Sir Captain Daniel Llewellyn, thanks to his service in the militia. No one would have ever claimed that he was lazy, especially after reviewing his resume which showed that he had served as a:

Although seeming to have had a very full life in America, Daniel would occasionally return to Chelmsford, England to check out his family home, see old friends and deal with any problems that had arisen during his prolonged absences. One can't help but wonder if his robust health was already beginning to fail at that time and, although he might have kept his suspicions to himself, he had been driven to put his estates located in England and Virginia in order.

It was during one of those trips that he sickened and died at age 64, leaving behind a very detailed will which granted specific sums of money and treasures to family and old friends. Some of the specific bequests in the will directed that:

The will went on to request that the funeral service be held in the Chelmsford Cathedral (already 400 years old when Daniel was born) and that his body was to be interred in the chancel area near "the reading desk". (Because of damages to the church incurred during its 800 year history - including the roof falling in on one section - it is impossible to identify specifically where Daniel's body was buried. However, it is possible that the "reading desk" could have been moved from the chancel area to the upper floor which now houses a renowned library containing medieval theological books and beautifully decorated manuscripts which had been donated to the church about 10 years after Daniel's death in 1677).


THE REST OF THE LLEWELLYN STORY: