William Knapp, (whose name was a derivative of the Teutonic name Knappe and often spelled Knoppe or Knop), was born in Bures, Suffolk, England and baptized in St. Mary's Church on New Years Day, 1581.  He was a carpenter - a practical trade which carried him through many of the crises of his life.  Some researchers believe his parents were Thomas Knapp and Alice Howlat, while others say they were John Knapp and Martha Blosse. (Fortunately, neither option has an impact on this story).

On January 11, 1607, 27 year old William married 18 year old Judith Tue, of Wormingford, Essex, England (a small town only 3.5 miles down the road). The young couple often moved between Bures and Wormingford after their marriage - with three of their children being born in one of the towns and four in the other.

But that pattern changed drastically in 1629 when they made the decision to leave their families, friends and home behind with no expectation of ever seeing them again.  It might have been driven by the recognition that their debts had grown too large and could never be repaid (just an assumption on my part).  Perhaps they simply craved adventure or, if they were Puritans, were the victims of religious intolerance.

Like many who were anxious to leave the “old country” at that time,  the Knapps could not have made the trip if William hadn't signed an indenture contract with Sir Richard Saltonstall.  In the contract, he pledged his life and services for the next seven to ten years to Sir Richard who would, in return, pay for the family's shipboard travel and shelter after they reached their destination.

Sir Richard was a wealthy landowner and signer of the original charter establishing a new territory named Massachusetts.  Some time later, he invested much of his fortune in the Massachusetts Bay Company, with the expectation that he and his family would join the “Great Migration” of Puritans seeking freedom to practice their religion without persecution.

However, because of his wife's serious illness,  he couldn't put all his plans into motion at that time, but that didn't stop him from getting his estate in order.  All his preparation paid off!  Shortly after his wife died, he was in a position to invest in and join “The Winthrop Fleet of 1630”.  This fleet of  11 ships included the barque, Arabella, which was to serve as the flagship on which both Richard's and William's families sailed to America.

Some historians assert that Judith Tue Knapp had died before her family left for England. However, most sources agree that not only was Judith alive, but she joined her husband and 7 children on the ship and actually lived for several more years.


The ships were packed with approximately 700 passengers plus ship crews and livestock.  Obviously, there was little if any housing on the ships, so temporary shelters had to be built on deck to protect the women and children during the 3,000 mile journey. All the plans finally came together and on August 26, 1629, they set sail from Yarmouth, England and didn't reach Salem, Massachusetts until June 12, 1630. 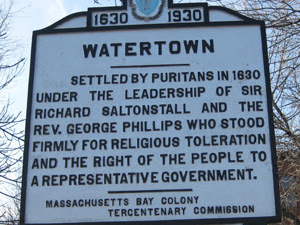 While most of the exhausted passengers took some time to get their bearings, Sir Richard acted on plans he had made long before, which didn't include staying in Salem.  After all, he had already invested in land on the Charles River known as Watertown.  It was there that he intended to  build the Saltonstall Plantation. In order to make that dream a reality, he had recruited some experienced planters, as well as craftsmen and servants, to travel with him on the Arabella up the Charles River, where they would start clearing the land and building homes for those families who would be arriving soon.

Although Sir Richard must have been sure that he had meticulously planned for every crisis that might arise, he hadn't counted on what turned out to be a huge obstacle to his success: the cold and stormy winter weather in Massachusetts! Because of its harshness, the water supply iced over, the ground froze, and construction stopped.  All this meant, of course that by the time winter set in, there were very few cabins completed.   It's effect on the Saltonstall family was devastating, especially since they, too, were forced to live in tents or unfinished cabins.  A number of stories about Sir Richard say that it didn't take long for him to decide this land and lifestyle were not for him and booked a return trip to England for all but two of his sons on November 30, 1630 (only 6 months after they had arrived).


Upon his return to England, Sir Richard found himself challenged to re-build his fortune - and do it quickly.  Very astutely he had made arrangements before he left Massachusetts to be repaid all monies owed him by both his indentured servants (which included William Knapp) and anyone else who was indebted to him. 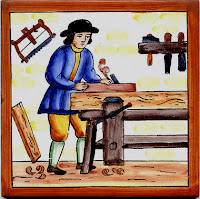 Not surprisingly, William Knapp had no desire to return to England, especially since he knew he could continue to earn a comfortable living as a carpenter.  Perhaps he also thought/hoped that with the departure of his sponsor, his debt of 19.5 pounds would be forgiven and forgotten - which was certainly wishful thinking on his part!

Perhaps he didn't fully realize that Sir Richard, with debts of his own, had no intention of letting any of his indentured servants or other debtors off the hook (especially William with whom he seemed to have had some problems).  As a result, he reached across the sea and successfully petitioned the Massachusetts “Court of Assistants” to collect all debts owed him.  One of the debtors was William, and the Court ruled that any money he or his sons earned was to be halved - with half going to William and the other half sent to Sir Richard until the debt was fully satisfied.

Despite losing that battle, William was still in better financial shape than he had ever been before - at least for awhile.  As one of the first settlers of Watertown, he had been granted several plots of land and even a 93 acre farm. However, old/bad habits die hard and there are definite signs that William (also known as “Ould Knop or “Father Knop”) continued to get himself into trouble.

The judges of the General Court must have come to know his name and habits well, since he regularly appeared before them on one charge or another, which included swearing,  selling beer for two years without a license and uttering "scurulus and undecent words" to the schoolmaster.  The most serious charge involved a huge fine and possible imprisonment for speaking against Governor Henry Vane the Younger.

William and his wife, Judith, lived together a number of years after arriving in Massachusetts. Although we're not privy to their discussions over the years of course, one has to believe that he didn't have to read her mind to know how she felt about the trouble he continued to get himself and his family into which often resulted in having to turn over their hard earned money in fines and being harassed by their neighbors.

Judith was about 70 years old when she died in 1639.  Like many men of his time, only a few months after his wife died, William entered into a prenuptial agreement and soon married a widow, Priscilla Akers, who seems to have traveled to America at the same time as the Knapps.

Despite his arduous lifestyle, William seems to have built a solid reputation as a good carpenter.  At age 75, he repaired the town meeting house.  After completing that project, he was hired to build  an animal pound, and upon finishing the job,  was hired to be the "pound keeper”, for which he received a small wage.

This man obviously had "chutzpah" and never saw a challenge he didn't think he'd win.  Despite all the trouble he had caused his family and friends during his lifetime, he sold much of his property to his son, John, and then applied for assistance from the Selectmen of Watertown!

But these townsmen knew him well and didn't buy into his tale of financial woe, especially because he had blown most of the money he had made over the years. As a result, they demanded that he place whatever was left of his estate into the hands of his children, who would then be required to support him. His children, however, had also reached the end of their patience and flat out refused the directive. So during the last years of his life, the selectmen took over ownership of his lands and leased them out, using the proceeds to  pay others for his upkeep.

William died at age 78 on August 30, 1658. The man's penchant for mischief lived even after his death!  Although his will had been dated July 5, 1655, it was never probated because of its ambiguous and confusing language.

All this led to another court battle - this time between his widow, Priscilla, and the children over whatever  had been left of his estate.  Priscilla appeared before the court with her premarital agreement and was granted the use of one-third of the lands of her late husband as long as she lived, her chest and her other necessary household utensils which had been withheld from her by John, William's son.

Since "The Old Burying Ground" was the only cemetery in use in Watertown at the time of his death it is believed that he was buried there. You probably won't be at all surprised to learn that he lies in an unmarked grave. 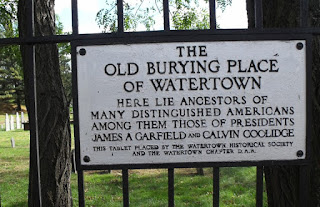 Based on the above tale, one can't help but agree that William was a complex man who often found himself in trouble on two continents. Despite all his mis-steps, however, his family prospered and became leaders in their communities over the centuries.  For more detailed information on William's life and tribulations see William Knapp