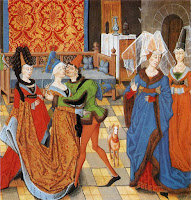 As the only child of Sir Guy and Lady Margaret Wolfson Sapcote, Anne became a very wealthy young woman at age 16 when she inherited her father's wealth and, a few years later, when she became the heiress of her mother's estate. So it wasn't surprising that young Anne would have been vigorously courted by both young and old eligible men. (In that day and age, a bride-to-be would have had to abide by her elder's final decision of a suitable husband, but she probably fervently hoped that the winner of the marriage lottery would be young, handsome and kind  - instead of old, ugly and crabby).

Imagine her relief  when 20 year old Sir John Broughton was chosen to be her husband. Not only was he her age, but he was already titled and wealthy (hopefully he was also kind and fun to be with but history doesn't record facts as interesting as that). During their nine years of marriage, they became the parents of one son, John Arthur, and three daughters, Elizabeth (who died quite young), Anne and 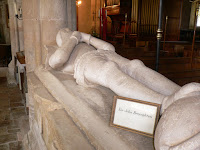 Katherine.  Sadly, their marriage ended much too soon when Sir John died at age 29, leaving Anne even wealthier than she had been before while being expected to re-marry quickly, as was the tradition.

Her second husband, Sir Richard Jerningham was a soldier and diplomat in the service of King Henry VIII.  Not only had he been knighted by the King in 1513, but he was granted a number of titles, including ”Gentleman of the Chamber”, and served as his King's emissary to conduct treaty negotiations with other countries.  Although both Anne and Richard had had children during their earlier marriages, none were born to them during the seven years they were together (probably because his duties often took him far from home, and travel in those days could take weeks, months and even years).  He died in 1825 - only seven years after they married.

Sir John Russell, the 1st Earl of Bedford, became her third and last  husband, with the only regret being that despite several pregnancies, only one of their babies, Francis, lived into adulthood.  All indications are that they had a good marriage and were devoted to each other.

While in her 30s and 40s,  Anne served as an attendant of Princess Mary, the only living child of King Henry VIII and his first wife, Katherine of Aragon. After Mary out-lived her father and waited out Lady Jane Gray, she was crowned Queen, and eventually brought the Roman church back to England.

While Anne and John Russell were vacationing  in Chenies Manor, a pregnant Anne sent a panicky letter to Lord Cromwell, asking him to petition the king to send Dr. Butts (aka “the Spanish physician”) to her husband who was sick with “a burning ague” (defined in the Bible as an inflammatory or burning fever”). At the same time, she requested a few grains of powder like that which had seemingly healed the Lord Admiral.  Whether-or-not the doctor and/or powder actually arrived in Chenies, her ailing husband did regain his strength, but not before Anne herself became ill and lost her baby.

One can only imagine how upset Anne must have been over the years as she helplessly watched her children became pawns ruthlessly used by King Henry to accomplish his goals.  There is no doubt that her family experienced a great deal of anguish at the hands of the Tudor king while only being able to watch the unraveling drama from the sidelines.

All those good feelings changed, however, after the Cardinal failed to persuade the Roman Catholic church to allow the King to set aside his wife of 24 years, Queen Katherine of Aragon, so that he could marry Anne Boleyn (the second of what turned out to be 6 wives).
After learning of the refusal of the church hierarchy to grant his request/demand, Henry threw a tantrum and - like a bratty spoiled child - had his old friend, Cardinal Wolsey, stripped of all his government titles and exiled to York, where he finally was able to fulfill his long neglected ecclesiastical duties as Archbishop of York.  While the Cardinal seemed to be adjusting to his new life, his King continued to simmer and sent soldiers to arrest him and have him charged with treason (a common device used by Henry against ministers who fell out of his favor).  Ironically, the Cardinal died of natural causes on his way back to London and never experienced what the King had in store for him.
It seems that the King had other plans for both of Anne's daughters which included marrying them off to Sir Thomas Cheney and Sir John Wallop, who were attempting to win control of the Broughton fortune the girls had inherited.  Those two men successfully persuaded the King to promise Katherine Broughton to Sir John Wallop and her sister, Anne Broughton, to Sir Thomas Cheney.
It's not surprising that after learning what had happened to her beloved daughter at the hands of the Countess, Anne was devastated; so much so that  her husband wrote a heartfelt letter to Lord Cromwell saying that Katherine was "all her (Anne's) joy in this world".  Even family friends testified that Anne would be "utterly undone" if her suit to have Katherine returned failed.

But fail it did, despite their efforts, largely because before Duchess Agnes Tylney was put to death, she had married Katherine to one of her sons, Lord William Howard of Effingham.  Several years later, Katherine and her husband got into deep trouble with the King when they provided assistance to William's niece, Queen Katherine Howard, the King's  fifth wife.  As a result they found themselves  imprisoned in the Tower of London for awhile with others who had offended the King (and they were many).

Anne and John retreated after all the drama to Thornborough Hall, which she had inherited from her grandmother after her second husband, Sir Richard Jerningham,  died. The property had originally been willed to John Arthur, but after his death it had reverted to his mother and her husband. The house itself was probably constructed between 1530-1550 and brought up to a standard needed to host the King and his court.

In celebration of her life with her dear husband, John Russell,  Anne had a chapel built in 1556 and attached to the parish church of Chenies in order to memorialize their lives together. The project was actually turned over to their son, Sir Francis, to complete.  It was a real work of art with the commemorative window showing Anne in the robes of a Peeress, with a coronet on long hair and with her feet on a heraldic antelope. For some unknown reason, the inscription on the monument gives her name as Elizabeth (perhaps that was a name she adopted after her daughter died?) 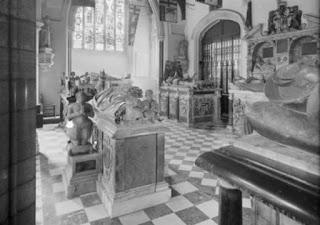 She was loved by many, including her son-in-law, Sir Thomas Cheney, who left her £100 in his will "in consideration of her great friendship and love borne toward me and mine” Sadly she died about the same time he wrote his will and never knew of his gift or his expression of love. 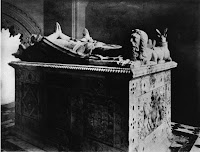 After building the monument honoring his parents, Peter Russell's career soared as an advisor to successive monarchs, which led to a title and great wealth.

But time changes many a landscape, and over the years,  Woburn Abbey became the principal family residence, while the Chermies property became increasingly neglected and eventually fell into disrepair after Anne and John's deaths.

Posted by Unknown at 7:13 PM No comments: Links to this post