Charles Mabry Copeland - a man who followed his dash

Like it or not, each creature born on this planet experiences two unchangeable dates in life - the one that celebrates birth and the other designating the day life as we know it ends. But it is the "dash" between those two dates that makes that person unique. 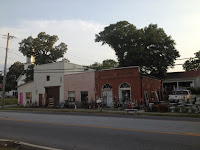 Charles Mabry Copeland was three years old before his home town, Whitesburg, was incorporated as an entity in Carroll County, Georgia.  And his life ended 67 years later in the same tiny town only 40 miles from Atlanta.  While Charlie was growing up, the town had a population of +/- 500 lives and it hasn't grown much since then with the 2010 Census showing 588 lives counted. Although today's young people of Whitesburg are able to take work outside of town - thanks to modern transportation - Charlie had few opportunities to improve his lot other than farm work or some kind of employment on the nearby Chattahoochee River that flows between Whitesburg and neighboring Carrollton.

One would think that - based on the above statistics - Charlie's dash had little to recommend it to a blog writer devoted to family legends.  That might have been so during the late 1800s, but thanks to computers today and my interest in digging past dry facts and figures,  I soon discovered that both Charlie and the little town of Whitesburg, Georgia lived through very interesting times which were neither dull nor humdrum for either.

For instance, for many generations, the major nucleus of the  Creek Confederacy, a loose grouping of related indigenous people, populated the area, while owning other great tracts of land in what would eventually  become Georgia and Alabama.  But, despite being rich in land, they had little in the way of hard cash to buy essentials from the local trading posts, and made the same major mistake many people make today - they had no resources to back up their growing debt and eventually realized they would never be able to repay them without restructuring" (sound familiar?).  There was only one asset they could liquidate -  some of their lands.

So, in 1802, the Creeks contracted with Chief William McIntosh to negotiate a treaty which would cede some of their land to the United States in exchange for debt forgiveness.  Chief McIntosh was a “half breed” with  blood ties to both the Indian community and  prominent Georgians.  Because of his fluency in both languages, he seemed a good choice to handle these very important negotiations.

They certainly didn't expect him to choose his English heritage over his equally strong Indian heritage and sign away all the tribe's remaining lands.  After his deception was discovered, the Creek National Council found him guilty of violating the tribal law protecting communal property and he was sentenced to death.  But one has to wonder whether anyone had ever thought to question William's loyalty to the Creek Confederacy in light of the fact that his  plantation and lifestyle heavily reflected only his English heritage.  History tells us that after the Treaty was signed and the Indian lands in Georgia and Alabama became available, a lottery for large plots of land was established which was open to all.

While this was going on, John Copeland (a Revolutionary War veteran living in South Carolina) died and - as was the custom - left most of his large estate to his oldest sons. Two of his younger sons, William and George, upon learning that it might be possible to attain rich farm land through the lottery in Georgia, decided to sell their farms and move their families to Georgia.  But before they could put all their plans in place, George died while only in his mid 30s.  Despite the ensuing heartbreak - or maybe because of it - George's family still was able to fulfill his dream by joining William in the migration to Georgia.

One of George's sons was Robert Hatten Copeland, a young disabled man known derisively as the "Snakeman”, whose deformities were attributed tohis mother having been terrified by a rattlesnake during her pregnancy.

After settling in Georgia,  Robert's infirmaries did not prevent him from marrying another former South Carolinian, Sarah Minerva, who became the mother of his 9 sons and 1 daughter before her death at age 49, the only blessing being that she didn't live to see her sons march off to war or grieve for the two who never came home.

A year after Sarah's death, 57 year old Robert married again – this time to a 25 year old, Ann Jane Ferris. They had only four years together before war was declared, and the family was torn apart as Robert's sons joined the Confederacy.

But despite the on-going war, Mary Frances was born to Robert and Ann a year after their marriage, followed by a son, Thomas (Tommy) who was born just as the War was drawing to a close.  The last child to be born to the couple was Charles Mabry (aka Charlie) whose father - by that time - was 64 ye and ars old and mother 36.

His childhood didn't last very long.  By the time he was 11 years old, his sister had married and his teenage brother, Tommy, had died suddenly.  Anytime a child dies, there is heartache and loss, but Tommy's death presented additional problems because  now there would be no one strong enough to help frail Robert with the farm's heavy chores, making it abundantly clear that they would have to find other ways to support the family.

Despite Whitesburg's dismal reputation as a dying town, it seemed for awhile that employment possibilities would open up, thanks to the planned construction of a rail-line running through Whitesburg and connecting Georgia to the Carolinas.  But that plan went awry when workers grading the road outside Whitesburg encountered a huge impenetrable layer of rock, thus literally stopping that construction opportunity in its “tracks”.

Fortunately for the town, a Plan B had been drawn up which would be good for the town, but not necessarily for the Copelands because there would be fewer employment opportunities which they could handle physically. That plan was to build a railroad depot in Whitesburg, making it the first rail center in Carroll County to serve the Central Railroad's Chattanooga Railroad line.  In addition, the town was finally awarded its own post office, which allowed it to become a central hub for mills shipping their product on the Snake River. 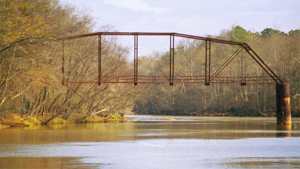 Thanks to all the activity centering on the railroad, other jobs opened up, one of which was perfect for Robert's family, despite his physical challenges. After some pleading, the Jones Bridge authorities agreed to hire Robert and Charlie to run the ferry across the Chattanooga River while Ann collected tolls.  This was a perfect fit for them, especially because the job included a house which allowed them to stay together for three years until Robert's health had deteriorated so much that Ann and Charlie could no longer take care of him.  After conferences among the family members, Robert's son, William, took Robert to his home and cared for him until his death in 1885.


Charlie and his mother must have felt especially blessed to have steady work during the next five years.  And they probably could see no reason why it wouldn't continue into the future.  But the river, which had sustained them, almost destroyed them when it overran its banks and washed away their home and belongings except for a chair, a chest and the family Bible (not much to show for a lifetime but precious to them and worth saving).  There is no record of what eventually happened to the chest and chair.  The Bible, however, was eventually taken to Chicago by Charlie's oldest son who planned to have it re-bound.  But that plan was literally washed away by a another flood - this time involving the Chicago River which flooded and caused great damage to almost everything in its path - including that precious Bible.

Even after the flood, Ann and Charlie were able to continue ferrying people across the

Chattahoochie and tending the "new" toll-free Jones Bridge. That bridge  stood for less than 20 years before it too fell into such disrepair that it was replaced by another, more modern bridge in 1922 (the remnants of the old bridge still stand where the Chattahoochee River flows roughly east-to-west instead of north and south).

Charlie put his own life on hold in order to take took care of his mother until - in 1900 - she died at age 65.   Her death, although certainly sad, opened the door for Charlie to adjust his "dash" and marry Lula Jane Johnson on his 29thbirthday.  There were 4 boys and - finally - a girl born to Charlie and Lula.

His dash over the next years centered around his family and life on a farm in Carrollton for the first 13 years of their marriage and - finally - back in Whitesburg where that final date (1938) became an official part of his history, but not before he had:

Finally, it became apparent that his dash through life was coming to an end when - at age 67 -  he began to suffer greatly with gall badder complications and died during surgery.  Lula Jane lived 12 more  years until suffering a stroke  in 1950. The graves of many family members discussed in this post can be found in the Whitesburg Methodist Cemetery.


Posted by Unknown at 10:44 AM No comments: Links to this post