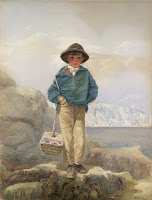 Being a child of his time, it is unlikely that 12 year old George was asked how he felt about the earth-shattering life changes being considered by his parents, Jonathan and Grace Fairbanks.  Whether he disagreed or agreed with their decision to leave their home in England, however, the fact is that by the time he turned 14, the family had sold most of their possessions in order to pay for their passage to America, with hopefully enough left over to buy land and get a new start when they reached their destination.

And so it was that in 1633, the Fairbanks family finally bade farewell to life as they had known it and their loved ones in Sowerby,Yorkshire, England (aka “muddy/sour ground' or "sewer") and set sail for America, (aka "The New World").

One can only imagine how they felt as they breathlessly watched the ship that would become their home for months unfurl its sails, an event that guaranteed that there would be no turning back.  What was guaranteed was that it would be a very long and dangerous journey and that they might not live through it.

Fortunately, the family did survive the trip and arrived intact on the shores of a territory called Massachusetts (meaning "great hill" in the language of the Algonquin Indians who populated the land).
But unfortunately, those same Algonquin Indians had no intention of giving up their land or their lifestyle to strangers – and would fight to the death to preserve their lifestyle.

After being warned that they could easily be in danger from the Indians as they moved inland, the potential settlers had agreed that it would be best to build their homes close to each other so – in case of attacks – they could come to each other's defense. It soon became apparent that the rumors of Indian aggression had not been exaggerated and the threat was real.  After all,  those Indians also had homes to defend and took exception to the plans being made by strangers for their lands.

But despite the lack of welcome from the Indians, the stubborn settlers officially incorporated their town in 1636 and chose to name it "Contentment", which wasn't well received by the Massachusetts General Court.  So, after a great deal of argument and discussion, they finally agreed on "Dedham" (named after a town in England where several of the original inhabitants had been born).


Fortunately for historians,  Dedham was one of the few towns founded during the colonial era that preserved extensive records of its earliest years.  Those records confirm that George's father, Jonathan Fairbanks, built the family home which  has been designated as the oldest wood-frame house still standing in North America.* 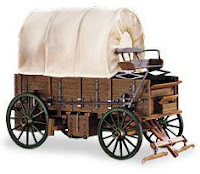 Those first years in America were both challenging and work intensive, with little time left over for love.  But despite all the challenges, 27 year old George Fairbanks fell in love with 21 year old Mary Adams, the daughter of Henry Adams (a man eventually honored as an influential founder of the nation)**.  The couple married shortly after they met and became the parents of seven children.

It wasn't until after their seventh child was born that the family packed up all their belongings and moved 15 miles to Sherborn    (an area eventually split into Medway and Millis, but at that time was a primitive area populated solely by Indians and wild animals).  Today that distance would seem no more than a sneeze, but for people of that time it was a long rough journey full of danger and rough ground over which to travel. There was no house with a warm fire waiting for them,  and their only means of transportation was their wagons, horses and oxen.


Thanks to his reputation for honesty and courage, within two years of making the move, George was appointed Captain in the "Ancient and Honorable Artillery Company of Massachusetts".  He took his duty as protector of the population very seriously - a necessity in light of the constant Indian attacks which threatened the population. 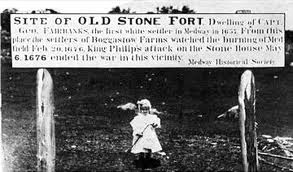 In response to those threats of danger constantly surrounding them, George and Mary enlisted their neighbors to help build a 65 x 70 foot, two story stone house/fort on the northern border of Bogistow Pond.  The building featured a double row of portholes on all sides which were lined with oak planks flaring inward so that they could direct their fire to every point of the compass without danger to themselves. The upper story was assigned to the women and children, and there was even a room partitioned off for the sick and injured.

By 1674,  George had become a prominent and highly esteemed leader in the community. 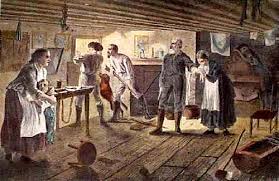 Thankfully, the garrison/stone house also proved its worth every time it survived an Indian attack, one of which involved a cart filled with burning flax which was pushed toward the house.  As it gained momentum it was "miraculously" stopped from reaching its goal by a huge rock which had "somehow" appeared in its path (good thinking on someone's part!).

Finally, the simmering anger on both sides erupted in 1676, resulting in half of the houses and barns in Medfield being burned to the ground and 17 persons killed.  Once they had bandaged up their wounds, the survivors decided they couldn't take this constant fear and harassment any longer, and this time did the attacking.  After killing the invaders still creating havoc in the town, they turned their attention to the ones who had been lurking in the woods near the stone house. As a result of the fierce fighting, the Indians finally became convinced that they were never going to regain their land, and faded back into the woods, never to return.

George was obviously a strong but opinionated man.  And those opinions were not always popular with his fellow townspeople, especially when he refused to join the local church because of the "taxes" they collected.  It was even more irritating when he claimed that he often traveled back to Dedham to worship in his family's  church.

Finally, after it became apparent that he would never willingly pay the taxes he owed, he was sentenced to be admonished in front of his peers in open court and would have to pay charges for the prosecution and fees of the court.  Again, he refused to pay.  "Ancestry of Eva Belle Kempton, part III, page 140 - 142

He felt so strongly about what he perceived to be tinkering with his life and beliefs that he called a meeting of the selectmen and offered to turn over all his rights and interest in Sherborn for forgiveness of his debt.  Although his solution seemed fair to most, the constable seized George's property and even a horse that the court felt should be given as payment to the minister of the church.

But before George and the town had arrived at an acceptable settlement, tragedy struck when 62 year old 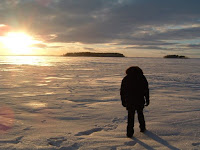 George drowned on January 10, 1681 -  presumably in the nearby Charles River.  It seems likely that since it was the dead of winter in Massachusetts - he must have fallen through a soft spot in the ice.  Why he was crossing the river at that time is unknown, perhaps it was to visit someone on the other shore.  He certainly wasn't swimming at that time of year!

His sudden death was a severe loss to the new settlement and widow, Mary, who lived another 20 years.  Several of their children became leaders in the community and the "New World" which their parents had adopted many years before.  There is nothing left of the stone house today.  It is believed that the stones became souvenirs for people who had heard the stories and carried them off to their own homes since the house was no longer occupied)..

(Their son, Jonathan, was the first physician in town,  a selectman for several years and the town clerk. who continued to live in the old stone house on Bogestow Pond until, ironically, 17 years after his father's death, when he too fell through the ice while attempting to cross the Charles River on Dec. 19, 1719, supposedly on the way to care for a patient).


***********
If you'd like to read more about this fascinating family check out the stories in "Legends of the Family" featuring  "The House that Fairbanks Built" , Henry Adams and Joshua Fairbanks

Posted by Unknown at 2:21 PM No comments: Links to this post