Their wedding was a legend - with stories often told;  those stories bring back memories made of solid gold:
They took it all in stride.

Tom's deep voice carried far and wide with laughter, songs and groans.
You could always see him coming and hear the floor boards moan.
His big hands seemed gigantic as they neared our pain-filled teeth,
And yet he'd gently fix those holes and soon there'd be relief. 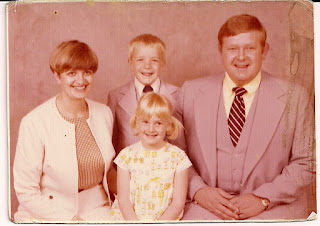 So as the years went racing by, he added to his story - with tales of kids, Air Force days and times of fun and glory. We knew him as a kindly man, but surely not an angel. We learned from him and watched in awe as problems he’d untangle.


That though his life might hit some bumps, he could always cope.


We learned the frailty of that dream when illness closed his eyes,


The helplessness we felt that week created heartfelt cries.

It’s no surprise his Lord knew best, and beckoned him to go.


For surely if he'd stayed on earth, his problems soon  would grow,


Instead his spirit flew away, his cares left far behind.

We're thankful for his time with us, we remember well those years,


and celebrate the good times, while sometimes shedding  tears.


Yes, our family had a loss: a strong man full of fun,


But we know he'll hover near 'til our own time is done.

Written in memory of my brother-in-law who left us on October 22, 2005 before he had a chance to know and love his new daughter-in-law or the  four grandchildren who joined the family after his death.   But as the years go by, his story will continue to enrich and entertain all those who  hear them, and if they listen carefully, they might even hear the echo of his deep laughter..

Judy Copeland
Posted by Unknown at 8:30 AM No comments: Links to this post