(This legend  may appear far down our genetic chain, but he's still family and we can claim him with pride.  His story is the 61st to be published in my blog, but has been one of the hardest to write so far - not because of a lack of information, but because there is almost too much!  As a result, my challenge has been to give flesh to the person hidden among all those printed facts -  even though it has been more than 400 years since his death!)

Sir Edward Montagu is believed to have been a direct descendant and namesake of King Edward I, who ruled England from 1272 to 1307.  That king, besides having been properly addressed as "Your Royal Highness", was called (probably behind his back)  “Longshanks” because of his great height and “The Hammer of the Scots” because of his response to the Scots' demand for independence.  Despite his heavy involvement in political intrigues and battles before and after he ascended to the throne, he was respected by most of his subjects for the way he embodied the medieval ideal of kingship (i.e. a soldier, administrator and a man of faith).


It is also believed that Sir Edward's last name originated on the female side of the family when, before his birth, a prosperous yeoman, Richard Ladde, of Norse descent, adopted  his wife's maiden name of Montagu - a name much better known because of its deep roots into England's royal family,

By the time Edward, the second son of Thomas Montague and Agnes Dudley, was born, the family had attained wealth and a stellar reputation, which allowed him more opportunities than most people even dreamed of at  that time. So, with an eye toward building on the family reputation and making a name for himself,  young Edward enrolled at Cambridge University in order to study law.

After completing his studies (did they have graduation in the early 1500"s?), Edward built his stellar reputation on not only his well-known family name, but his willingness  to take on and successfully complete any job that was offered - no matter how seemingly menial that job might seem to those of us in the 21st Century, such as:
During his lifetime he was married three times, had 11 children and had inherited Boughton, the family estate, following his older brother's death since the brother had not any sons to carry on the line. 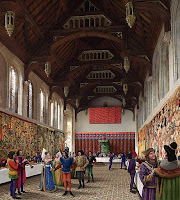 Finally his attempts to become known for his abilities and devotion to King Henry VIII  (yes, that King Henry) paid off when, in 1537, the king both knighted and appointed him a “sergeant-at-law", a position which allowed him to represent the King in legal matters.  The candidates for this honored post were required to have been barristers for at least 16 years and  the newly appointed sergeant was expected to host a magnificent feast and party to which the king and his queen were invited.  Edward took it several steps further when his lavish party lasted five days and did, indeed, include attendance by the king and whoever his queen was at the time. This was an impressive step in his career  because he was now eligible to be chosen as a judge, and even if that fell through, could continue to plead in court and win fees.

That 5 day party must have really impressed the King because a short time later, Sir Edward was appointed to serve as a judge on the powerful “Courts of King's Bench and Common Pleas”.  On the surface, it seemed a giant step up in his career; however, the truth was that the Bench had been steadily losing its power over the years because of earlier actions taken, as well as the changing expectations of the public.  It took hard work and dedication, but finally Edward and his co-judges were able to stop that downward momentum by pushing for revolutionary reforms which resulted in less expensive, faster and more versatile types of pleadings.

With Edward's talent for being in the right place at the right time, he was serving King Henry when the king's anger over the Catholic church's constant criticism of him and his habit of changing wives in often violent ways boiled over in 1539.  The punishment he meted out for their actions was extremely harsh: he closed down all the Roman Catholic churches in his country and took ownership of the religious houses dotting the land, which left these beautiful buildings completely empty.

As one of the richest Benedictine monasteries in England, the abbey of  St. Edmunds Bury had long been coveted by the Montagus who owned the adjacent property.  When the opportunity presented itself, Edward was finally able to acquire the “Great Hall of the Monks”, which had been a part of the Abbey and added it to the family estate.  Eventually Edward expanded the manor house on the property which remained in the Montagu family for many generations.

Sir Edward continued to build his reputation and wealth over the years, even when it sometimes seemed that he had been demoted.  By 1545, he had been transferred from the King's Bench to the lesser (but less onerous) post of Lord Chief Justice of the Common Pleas.  The timing was interesting!  By that time, King Henry's health was declining and he suspected he wouldn't live much longer. He was, therefore, driven to make sure Edward, his 2 year old heir, would be protected and nurtured.  Based on their history together, it's no surprise that Lord Chief Justice Montagu became one of sixteen executors of King Henry's will, as well as the guardian of the future king which, although important, was not his only responsibility.

One of Sir Edward's other responsibilities as Lord Chief Justice was to lead a commission investigating serious charges brought against the Duke of Norfolk.  In 1547, after the Duke finally admitted to plotting against the crown, he was sentenced to die.  Ironically, on the very day that was to be the Duke's last, 56 year old King Henry VIII died - so of course all sentences were put on hold.  It might seem the Duke had been incredibly lucky, but maybe not. His revised sentence took away both his title and all his property and, even worse, was imprisoned in the Tower of London for many years.


Edward VI, the 9 year old son of Henry VIII, was crowned shortly after his father's death, and became England's first Protestant king. But, because of his youth, he had been placed under the thumb of the Council of Regency, a group of powerful men appointed by his father.  Sir Edward Montagu was also a member of the Council, but soon found himself in opposition to most of their directives.

The young king never really had a chance to rule.  At age 15 he contracted a terminal disease, which forced him and the Council to dig out the Constitution of the land with a view toward amending the “Devise for the Succession”.  This clause had become more important than ever before because if it was allowed to stand, Edward's oldest Roman Catholic half-sister, Mary, would ascend to the throne after his death.

The young, ailing king did not have the experience, stamina or wisdom to break the spell woven over him by the majority of manipulative and powerful men on the Council of Regency.  As a result of constant arm twisting and manipulation, he finally bought into their arguments and agreed to name his cousin, Protestant Lady Jane Grey, as his successor.. Sir Edward vigorously fought against this proposed change until he realized he was in the minority and it was a losing battle.  After fighting the inevitable, he finally bowed to the majority decision and ordered that  "... the King himself was to draw up the legal instrument necessary to devise the crown away from his half-sisters."

Montagu had obviously lost much of his influence and power in that fight and had found himself being bullied by the Duke of  Northumberland, who called him a traitor and even threatened him with physical violence unless he agreed to the proposed change. Despite having eventually given in, his enemies had gained power and used that power to punish him for what they considered his betrayal of their cause. As punishment, he was fined 1,000 pounds, removed from the Court of Common Pleas, lost some of his property and was imprisoned in the Tower of London for several months.  A footnote in history tells us that after King Edward died in 1553,  Lady Jane ascended to the throne but only ruled for 13 days before she was deposed by the rightful heir, the Roman Catholic Mary.

No matter what had happened with Lady Jane and Queen Mary, Edward lost heart – and face – during the conflict, and retired to the Boughton Manor where he died in 1557.  Papers found after his death indicate that he felt guilty the rest of his life for caving and signing the Devise for Succession.  Quite a fall for a man of his stature!

However, despite his belief that he had been a failure and "sold out his values", he was honored even after his death when his casket was carried with great pomp and ceremony in a “hearse of wax” to the cemetery of St. Mary the Virgin, Weekley which had been built a few years before his death but is still standing today. According to the “Dictionary of National Biography, Volumes 1-20,22, his tomb's inscription reads:


"Farewell, O Edward Montagu father of Justice and master of the Law, you whom sober skill has nourished and wicked knaves of men have feared had lived in the ancient manner, a lover of peace and an unyielding guardian of virtue and scourge of vice... "