Thomas Tinsley - first immigrant to America in his family

An oft' repeated dilemma facing genealogists researching ancestors born centuries ago is that there are few documented facts about their early lives; which, of course is a problem when trying to build an accurate story about a real person who lived long before we - or even our great great grandparents -  were born. So the alternative is to write a story which might not be totally accurate but enables one to see the ancestor as a human being, while incorporating as many documented facts as possible.

This certainly holds true for Thomas Tinsley (also spelled Tisley, Tilsey and Tinsely).   Most family historians agree that Thomas (aka Tom orThom?) married an English girl, Elizabeth Randolph, in 1638 -  supposedly the same  year they both arrived in America and their first son was born. But the story has many pieces missing, such as:

Why did these brave people leave their homes?  It could have been just an adventurous spirit or perhaps it was because England was in turmoil at that time and life was very hard - with few opportunities for the young.  So it might have seemed that anything would be better than the life they were living - even if it meant leaving loved ones behind and having to spend several years in servitude to, hopefully, a kind master. However, very few could afford the 6 pounds fare, and it's likely that the less adventurous decided not to  venture into the great unknown without the support of family or friends.  Luckily, for their descendants, Thomas Tinsley, Elizabeth Randolph  and Richard Nance were among those willing to take a chance on building a new life in an unknown environment. 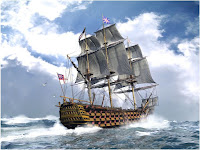 After making the decision to leave home, Tom would have petitioned a ship's captain to make arrangements for an indenture contract.  Knowledgeable captains usually had a list of planters willing to pay the fares of young, healthy people who - in turn would work at whatever job was assigned - for five to seven years.

John Robins (who had probably come to America as an indentured servant himself, but was now a planter in Virginia) agreed to pay young Tinsley's fare and probably that of several other immigrants, in return for receiving whatever services he demanded for a defined period of time  and a grant from the Virginia Colony of 50 acres of land per sponsored servant.  Upon satisfactorily completing the indenture contract, Thomas would be granted 50 acres of land in Virginia and full citizenship. So it was that Thomas (and probably his wife) arrived in James City County, Virginia in 1638 - strangers in a strange and violent land.

In 1645, when Thomas was about 27 years old, his indenture contract would have been completed.  Records show that upon being freed, he was awarded 50 acres of land on Moses Run Creek, which flowed into the west side of the Chickahominy River in James City.  Within a short time, he was able to build a solid reputation as an astute and productive planter who shipped tobacco to England in return for  domestic luxuries which were not available in America at the time..


Within 5 years after being granted his freedom, he could add more land to the original grant on Moses Run Creek through paying the fares of six  immigrants sailing from England - as he had done not long before. In return, he like John Roberts, received not only much needed services on his growing plantation, but was granted 50 acres on Moses Run Creek per servant.

Ironically, 12 years later he would be  granted a patent for 300 more acres on Moses Run by the colonial governor, Sir William Berkeley (who - ironically became his enemy within a very short time after that grant).  Not bad for a man who had arrived in America as a slave, with literally nothing except his brainpower, willingness and strength! 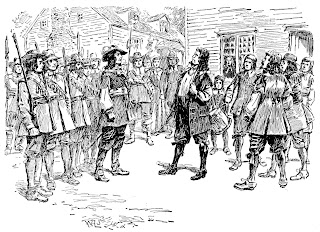 That was not a peaceful time in Virginia, however, with anger bubbling to the surface in 1676 under the leadership of Nathaniel Bacon in an action dubbed “Bacon's Rebellion".  It was a time when strong criticism was being directed at the governor, Sir William Berkeley, who not only refused to defend the frontier and settlers against attacks by Native Americans, but granted special privileges to his close friends, while supporting the imposition of high taxes and low prices for tobacco.

Despite many protests and broken promises, nothing was resolved until a very frustrated Bacon recruited his equally unhappy friends and neighbors and led two unauthorized - but successful - expeditions against the aggressive tribes.  "Our" Thomas Tinsley was one of the planters who supported Bacon as he  confronted the Governor and demanded that the ever-growing list of wrongs be righted..
.

Because of unceasing pressure by both the populace and the English government, Governor Berkeley was finally forced to  convene the newly formed and mandated House of Burgesses (which he had hoped would go away because of lack of action).  What was even worse, the governor had to allow his nemesis, the newly elected Nathaniel Bacon, to take his seat as a member of the new legislative body.  But the Governor still had tricks up his sleeve and had Nathaniel arrested on trumped up charges just as he attempted to take his elected seat.

But times they were "a-changing".  This arrest of a popular local man boomeranged on the Governor when it wakened the ire of supporters who had previously refused to take sides, and he was forced to set Bacon free. That did not end the matter.  The door of the jail had barely been opened before Bacon gathered his supporters and marched on Jamestown, where the cornered governor was forced to grant him a commission allowing him to continue his campaigns against Native Americans.

The governor might have had to bow to the demands of the populace, but he was  still adamant about stopping his chief foe and critic.  As a result, he fled to the Eastern Shore of the state, where he put together enough manpower to allow him to return to Jamestown and proclaim Bacon and his followers rebels and traitors. 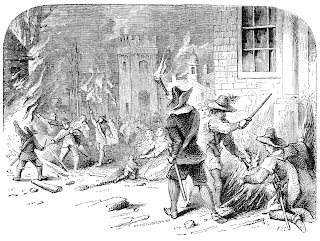 After a sharp skirmish, Bacon recaptured the capital and Berkeley again took flight - but not before setting the town on fire because he was afraid he couldn't hold it against Bacon's attack. This should have been Bacon's finest hour!  After all, with the desertion by the Governor, he now controlled the colony, but not for long. In October of 1676, he died suddenly.


Without his leadership, the rebellion collapsed and the Governor, who was not done with wreaking bloody havoc on his enemies, returned to take his vengeance on the population he felt had betrayed him.

Since Thomas Tinsley was a participant in Bacon’s Rebellion, he gladly added his name to a document titled “Blisland Parish Grievances”, which was dated April 2, 1677 and listed the many grievances perpetrated by the Governor that had eventually led to the rebellion.  The document was sent to England and caused such a stir that in short order, three royal commissioners were sent to investigate the reasons for the armed revolt. Included in those complaints were “high taxes, Indian murders and depredations, execution of sheriffs, selling of strong drink during court days and duties levied on ships”. The signers of the grievances had also been distraught over having had to obtain arms by any means in order to defend themselves. This document was later considered by historians to have been the opening gun of the long struggle for American independence which wouldn't actually begin for almost 100 years.

During those years, Thomas and Elizabeth built their home on what is nowTotopotomoy Creek, (originally called Moses Run).  The property is 12 miles north of what is now the booming city of Richmond and was named "Totomoi" in honor of a great Indian king called Tottopottoma who was slain in battle while fighting for the Christians against the Mahock and Nahyssan Indians. Their originial house is no longer standing.  However, the house that took it's place and carries the same name was built in 1800 by Thomas Tinsley VI.  The house and property are still owned and maintained by the Tinsley family and was listed on the National Register of Historic Places in 1976.

Thomas Tinsley followed the English custom of naming the first born son after the father, with this son inheriting the bulk of the estate. So in his will dated October 9, 1700, he left his eldest son, Thomas Tinsley II: "one young gray stoned colt branded TT." (This brand, which was used by him in seventeenth century Virginia, was one to the first in what would eventually be known as the United States of America. His use of this ownership mark was 100 years before burned brands had come into limited use by the end of the 18th century. George Washington, however, followed the same practice and burned "G.W." on his cattle, the position on the animal indicating the plantation where they were pastured.)


Thomas and Elizabeth must have set records at that time in our country's history by being married more than 60 years.  Even more amazing is the fact that seem to have died the same day in 1702 (wouldn't you love to know more about that event?)  They are both buried at St. Peters Church in Hanover Co., Virginia which pre-dates the revolutionary war.