Sir John Copeland - fighting for his king in Medieval times

Several years ago, while researching John Copeland, the Irish Revolutionary soldier featured in my first post, I discovered that the Copeland name was actually deeply rooted in "Coupland Castle", a medieval structure still standing in the Village of Coupland, outside Northumberland, England - not Ireland, as commonly believed. Thankfully, it didn't take a lot of digging to fill out the legend which had been lurking out there, waiting to be told. 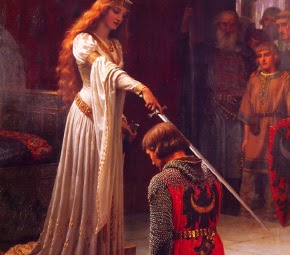 The earliest documented soldier in the family was John de Coupland, one of 12 knights who, in 1248, were chosen by King Henry III to meet with Scottish commissioners in order to settle a number of recurring border disputes.

Almost 100 years later, Scotland again - or still - was causing problems for the English when another John, Sir John's grandson and the Governor of  Roxbury Castle, earned an important place in medieval English history.

While fighting under the banner of King Edward III during the so-called "100 Year War", Sir John captured King David Bruce II of Scotland, who was the last of his royal line in Scotland.  King David had been recruited by France to attack the English with his 12,000 troops, thereby creating a diversion and hopefully weakening England's military efforts.

The Battle of Neville’s Cross was decided on October 17, 1346.  The forewarned British had prepared well to meet the enemy, so before the Scots could coordinate their efforts, the English had identified the best ground - a narrow ridge - to favor them in a fight.  Even though the Scots were stronger and had seemed at first to be winning, they were eventually out-maneuvered and fled the field, leaving their king behind to be captured and imprisoned.

The total casualties of the battle are not known with certainty;  however sources indicate that while the English losses were minimal, there were about 1,000 Scots killed and many more captured.  Those captives included a wounded King David Bruce, who was disarmed after knocking out two of Sir John de Coupland's teeth with his gauntlet in the struggle to free himself.


After the battle ended, Sir John proved to be a stubborn man (a Copeland trait?) who could have easily lost all he had won with his refusal to obey the orders of Queen Phillipa.  The queen had remained at Newcastle during the battle, and demanded that John deliver the wounded Scottish monarch to her. Highly insulted by his refusal to accept her authority, she sent her complaint to the King who was laying siege against Calais, France at the time. 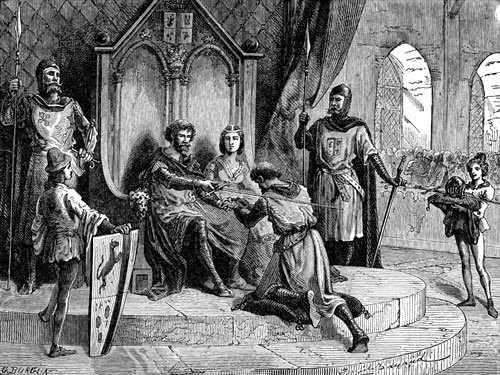 Soon after King Edward  received the queen's message, he summoned Sir John to explain his disobedience.  On his way to Calais, John first stored his prisoner in a nearby castle.  As soon as he appeared before his king, he fell to his knees and forcefully explained that he had meant no disrespect to the queen but that he had sworn  allegiance only to his king and had risked his life only for him and his country.

Upon hearing Sir John's impassioned speech, the king acknowledged the man's loyalty and bravery, and granted him a rich reward of five hundred pounds a year and land.  In addition, he was made a Knight Banneret (a Medieval knight who could lead a company of troops during a time of war under his own banner and was eligible to settle whatever new territory he conquered), the Sheriff of Northumberland, and Keeper of Boxboro Castle.  Obviously, Loyalty earned its own reward in this case (you have to wonder whether Queen Phillipa agreed with the king's generosity)!

de Coupland was then ordered to deliver the prisoner to the queen, who imprisoned him in the Tower of London for eleven years. The following year the English were able to occupy almost the whole of Scotland south of the Forth and the Clyde. Following his rise to fame, Sir John de Coupland became a powerful figure in the north of England, and eventually his ruthless pursuit of power produced many enemies, one of whom ambushed and killed him in 1363.


History is pretty murky for several hundred years after the great battle, but we do know that sometime before the 18th Century, this branch of the family migrated to County Down, in the Ulster Province of Ireland. The question is: why would this well-known English family leave a place they loved and live in a place where they weren't wanted?  It is believed that they may have been chosen to participate in a plan hatched by their government entitled "The English Plantation Movement" and were offered incentives such as land and money to make the move.  The underlying hope behind the plan was that these solid, loyal citizens would bring peace and stability to an area that had always been resistant to English control and had often threatened rebellion.


But not all of the Copelands migrated to Ireland. The  family can be justly proud of those who stayed behind in Straffordshire, England where William Taylor Copeland joined Josiah Spode, an outstanding ceramic artist, in creating a company still highly respected today: Spode, Copeland and Sons. They became highly successful creators and dealers of china, glass and earthenware in London, while also operating on Copeland Island off the Northern Coast of Ireland. In 1835, this same William Taylor Copeland became Lord Mayor of London.

Lawrence Copeland, a lineal descendant of Sir John, was the first to leave Ireland because of his religious convictions and he is believed to have founded a major branch of the Copeland family on the East coast of Massachusetts.

Our lineal ancestor, George Copeland, and his children left Ireland and settled in Chester County, PA in the early 1700s. After settling his family, he traveled with his young son, John (who became a soldier in the Revolution), and a group of Scotch-Irish immigrants to South Carolina where they attained great swatches of land.
My sincere thanks to the following resources which made this story of a legend possible:
http://www.battlefieldstrust.com/resource-centre/medieval/battleview.asp?BattleFieldId=28
http://militaryhistory.about.com/od/battleswars12011400/p/Second-War-Of-Scottish-Independence-Battle-Of-Nevilles-Cross.htm
“Some Copeland and Little Families”, written by A. Lucille Harney and Fairline Bigley (Library of Congress Catalog Card Number 98-74171)