Yes, it is a fact that “Fred” Franklin was born in Indiana and died in Indiana 86 years later.  But is this the whole story of his “dash” from birth to death? Not hardly!

The first chapter in his life opened in Columbus, Indiana where he was the fourth child born to Corda and "Frank"  Franklin. From that point on, his life was a story of  love and loss, pain and comfort, fear and faith, fun and drudgery - and always the underlying theme was the search for security,


Since education and job skills were lacking, finding work was a never-ending challenge for Fred and his cousin, Tracy Jeffries, and they were often forced  to travel from state to state to find work.  In the early 1900s, Fred and Tracy signed up to process newly harvested wheat on a “threshing crew” in Kansas. 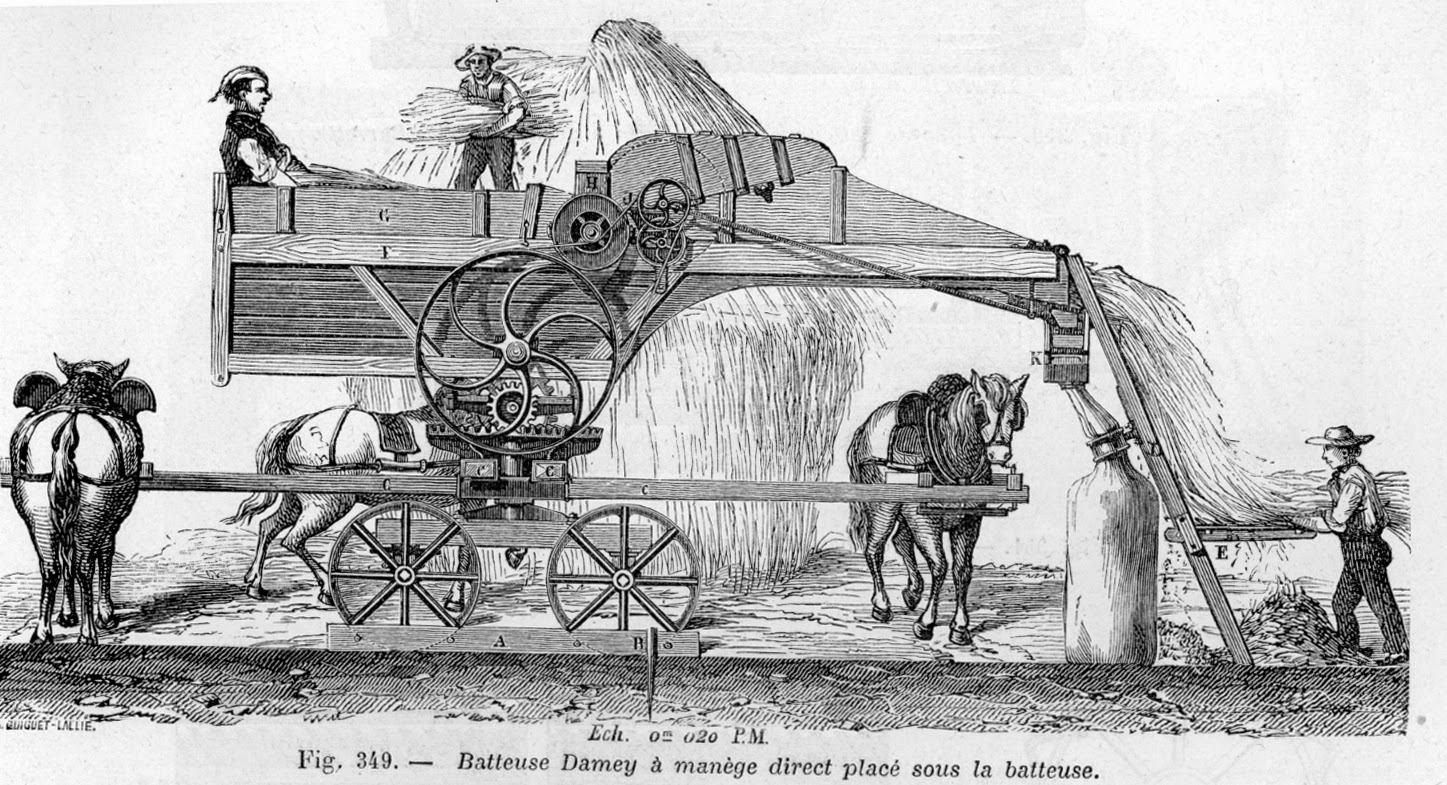 Can you describe a threshing machine or its purpose?  I have to admit  it was not in my repertoire of miscellaneous facts until I read my Uncle Carthel Franklin's memoirs, in which he related his experiences while growing up on the family farm in Indiana. One of those memories involved a 15 foot high, 30 foot long threshing machine which was pulled into the barnyard to process the thick stalks of harvested wheat.  It was filthy work and, by the end of the day, the laborers were covered in a "thick sweaty mixture of dirt, wheat dust, and chaff".  Upon completion of the process, the grain would be bagged and the stalks blown into a large pile for the farmers to use as bedding for their cattle during the winter.

That Kansas threshing crew included twins Floyd and Boyd Dickerson, who would talk about their oldest sister, Clara, and baby sister, Queen, who had left West Virginia and were living in Arkansas. In the Fall of 1909, after the work had been completed,  the Franklin cousins started for home accompanied by the Dickerson boys who wanted to stop off in Arkansas to visit their family and introduce their new friends.

Following that visit, Fred and Queen stayed in touch through occasional postcards.  Of course no one can know what conversations went on between the migrant worker and the daughter of a Baptist minister as their love grew, but we do know that Queen refused to consider marriage unless Fred agreed to never touch a drop of liquor again.  He did make that vow and stuck to it for the rest of his life. However, he continued to chew tobacco and smoke "Wings" cigarettes until he died. A compromise maybe??

Then the following year, after Fred and Tracy had finished their threshing crew duties, they returned to Arkansas where they found work as sawyers in a saw mill.  But it wasn't long before they were able to connect again with the Dickerson family. The rest, as they say, is history.

The March 29, 1911 wedding of 30 year old William Frederick Franklin and Queen Rebecca Dickerson took place in Warrensburg, Missouri, was performed by a Justice of the Peace on Queen's 20th birthday, and witnessed by the bride's mother, Emarine Dickerson.
With the arrival of two babies by mid-1913, the Franklin's financial situation became even more dire. After all,  there were no food stamps, welfare checks or unemployment insurance at that time. And even though Queen had taught school before her marriage, the“breadwinner” in the early 1900s was typically the man in the family, so the job hunt was on his shoulders while Queen cared for their growing family.


Thankfully, the financial situation had improved by1920, when the family (now with 4 children) was able to buy a comfortable home in Rittman, Ohio, thanks to Fred having secured a  job in a boxboard factory. Adding to their good fortune, Queen's extended family lived nearby, providing stability and support.

However, in 1923, Queen developed a persistent cough, and Fred became convinced that the cough was caused by heavy industrial pollution which could lead to tuberculosis. He strongly believed he needed to get her to a safer place to live, and was eventually successful in convincing her to move to Indiana where Fred had grown up and still had family. The first half year spent in Indiana was a continuation of their hardship story, with Fred working as a stone mason in a quarry 6 days a week, twelve-hour days for little pay.  But by the end of those six months, they were somehow able to scrape together enough money to buy a 60 acre farm with an adjoining general store in Gaff, Indiana, a town consisting solely of the store and farm.  A recent Google search indicates that Gaff has disappeared from Ripley County maps and - in fact - the state would like some information on this mystical town.

Although work on the farm and store consumed most of their time and energy, Fred and Queen could still find time for fun!  Visitors were always welcome.  Upon their arrival, work would stop and the games would begin of  croquet, horseshoes – and/or cards. This in itself was amazing because, in their early years, Fred and Queen strongly believed that playing cards was a sin and went against their Baptist faith – that was until their daughter convinced them that if you didn't bet on the games, it was no sin!

They also loved music and all 4 children were given music lessons. When the work was finished for the day, they'd often call their neighbors, using a telephone system which consisted of "one wire strung between glass insulators nailed to wooden poles throughout the area".  Each family had its own number of rings.  Shortly after the call went out, a "jam session" would take hold in the Franklin "front" room, which was furnished with a piano. With no diversions like TV, this type of entertainment served to lighten some of the burdens they all carried.  NOTE: A completely unknown fact came to light recently when it was learned that Fred had been an accomplished musician who played the violin, piano, guitar and mandolin. He and his uncle, Bill Franklin, who was an accomplished old fashioned fiddler, were in constant demand to provide the music for barn dances, weddings and assorted celebrations. His music stopped sometime before the grandchildren appeared on the scene and it was never discussed.  I can only guess that the break came when they left the farm for Chicago.

During those first years on the farm, business in the store was brisk,  But eventually, after the roads were paved and cars became more dependable, their customers began to travel to the larger towns of Versailles and Osgood to take advantage of the greater variety of goods and lower prices.  Eventually the store had to be closed and the cash again began to dry up.  So of course the Franklins were soon looking for ways to earn additional money.  About that time, Queen's brother, Boyd Dickerson, suggested that they sell Watkins Products to the neighboring farms. It was a good idea. Because they only had one car, they had to take turns covering their individual routes but made enough money to help pay their expenses.

In the 1930s, the children began to yearn for city life. Thanks to the commitment made by Fred and Queen early in their marriage that their children would never experience the pain of poverty that they had, education was a top priority - even when money was tight. And that commitment paid off!  Although  it was common practice for farmers to occasionally take their children out of school to help in the fields, Fred would scrape together money to pay for outside labor.  Each of their children was expected to graduate from high school and go even further with his or her education.  So even though their parents couldn't support them financially,  Evert, Edna, Paul and Carthel found a way to achieve their goals - often helping each other get over the rough spots.  All four became highly successful in their adult lives and were grateful for the sacrifices their parents had made.

By the time WWII broke out, Edna and her husband were living in Chicago and "the boys" had also drifted to the big city for work.  Then came Pearl Harbor and Evert enlisted in the Signal Corps, Paul in the Air Corps and Carthel in the Coast Guard. With no one at home, Fred and Queen decided to rent out their farm to neighbors, sell their farm equipment and move to Chicago themselves, where they rented an apartment near Edna's family.  It wasn't long before  Fred got work in a small aircraft factory, while Queen worked as a seamstress.  They didn't return to the farm until 1946.

In the mid-50s Fred's health started to deteriorate. When he could no longer manage the care of the farm it was sold, and they moved to Indianapolis where Fred eventually died. I hope that in his later years he could   understand that despite all the detours and bumps on the road of life, the journey had been worthwhile - and the world was a far better place because he had lived.

Posted by Unknown at 8:00 AM No comments: