Augustus Cory Lane - The survivor of a massacre

Little is known about Amos and Lucy Sanders Lane other than that they were born in Vermont and  raised their eight children in Cattaraugus County New York - as did Theophilus and Susan Sykes Fairbanks, with whom they would maintain close ties from generation to generation.

The story of their oldest son, Augustus Cory Lane, began when he turned 21 and heeded the call of Horace Greeley to "Go west young man, go west".  His desire to explore the upper half of the country may also have fit in with his family's dreams to build a new life in an unsettled part of the country which would offer plenty of open land on which to raise their families.  This dream had been upgraded after learning of the massive land deal which had recently been negotiated between the Sioux Indians and the United States.

And so it was that the young man packed up some food and a few belongings, kissed his recently widowed mother goodbye and perhaps even hugged Elizabeth Fairbanks, a 13 year old girl destined to become his wife someday, and set off on an adventure that was to change his life and the lives of those he loved forever.

During the next several years,  Augustus worked his way around the Great Lakes until finally reaching Oshkosh, Wisconsin, an area he and his family were to return to often.  But it wasn't until he arrived in the newly chartered state of Minnesota in 1860 that he knew he had finally found a place he could wholeheartedly recommend to the families back in Upstate New York and returned home to make his case.

It had only been nine years since the Dakota Sioux Indians had sold 24 million acres of their land to the United States for $3,750,000 (or $12 an acre).  Now that land had been opened up for settlement to people like the Lanes and Fairbanks, who - after hearing Augustus' report -  sold their homes and property in New York and headed West with new dreams and expectations.

During the seven years Augustus had been traveling, 13 year old Elizabeth Foss had  become a 20 year old woman who agreed to marry him after their wagon train arrived in Waupun, Wisconsin.  Following their wedding  on the 4th of July 1860, the young couple moved to Blue Earth, Minnesota where they they built a log cabin to house their growing family, a barn and a windmill.

Tragically, peace on the plains ended a year after the Lanes arrived and only 10 years after the contract transferring 24 million acres of Indian land to the United States had been signed.  Upon reviewing the contract, the tribal leadership had begun to suspect that not only had they been cheated out of $2,085,000 still owed them but that deletions and changes had been made to the original terms of the contract without their approval.


The timing of this crisis couldn't have been worse!  While the feelings of betrayal were beginning to boil over in the tribes, the "War Between the States" was heating up in the lower states and many Minnesota men were leaving home to join either the Union or Confederate army, thus leaving their families unprotected and struggling to care for their farms.

As that war loomed, the Dakota leadership appointed their highly respected Chief Little Crow to lead a delegation to Washington in an attempt to amicably correct issues such as the: 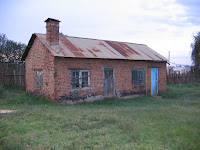 Despite all their effort, however, the Indians were no match for the professional negotiators they faced, and they actually ended up with less land and no rights to mine a quarry which had originally been theirs.  Adding insult to injury, Indian families were moved into small and uncomfortable brick houses.  Not surprisingly, in a very short time, most of the Indians had returned to their teepees and used the brick buildings only for storage.

Anger continued to build up during the particularly hard winter of 1861 when the promised payments (annuities) which would have enabled the Indians to buy food and supplies did not arrive, thus forcing them to revert to using their hunting skills to keep from starving or freezing to death.  Making matters worse, even after an Indian agent was finally authorized to handle all transactions in a timely manner, the traders didn't trust him and still refused to deliver any supplies to the desperate tribes.

The simmering anger finally came to a head on August 17, 1862 as four young braves returning from an unsuccessful hunting trip started complaining about both the settlers and their tribal leaders who they believed had let them down (which was true).  As they neared home, one spotted a nest of hens eggs and started to gather them.  Warnings from his friends that he could get into trouble if he got caught stealing food from the farmer inflamed feelings that were already smoldering.  So - after successfully daring his friends to join him - they  raced into the farmyard where they attacked and killed not only the farmer, his wife and daughter, but also two of their neighbors.

While still riding the high wave of emotion and blood lust, the young men loaded food and supplies onto the farmers' horses and headed for home, where they expected to be  congratulated and honored.  Instead, the chiefs of the tribe expressed anger that they had forgotten the unwritten law governing the Old West which sentenced anyone caught stealing a horse to immediate hanging without a trial.

Not only was that bad news for the young braves, but the murder of five settlers created very real danger for the whole tribe. After hearing the unedited story from the now thoroughly frightened young men, an emergency meeting of the tribal council was called to decide the best solution to a very bad problem. After hearing all the bitter arguments raised that night, the chiefs finally decided that instead of turning the reckless young men over to the military for immediate execution, they would declare war against the whites by simply doing nothing.

As the chiefs debated back and forth that night, Little Crow was the only one to speak strongly against going to war.  But, after being overruled, he agreed to lead the warriors because he knew he was the only leader in the tribe with the skills to possibly overcome the settlers.


He also knew that their only chance of success was to take the whites by surprise, so that very morning, he led an attack on a government agency housed in Redwood Falls.  It was a popular decision! The agency had been largely responsible for delaying payment of the annuities and, as a result of their inefficiency and/or malice, many Indians had died of starvation and disease.

The sudden violent attack did take the farmers, missionaries and settlers by complete surprise, especially because most of them had convinced themselves that they had shown nothing but kindness and friendship to the Indians (while ignoring all signs to the contrary).  By the time the dust cleared, most of the inhabitants had been killed simply because they were in the wrong place at the wrong time.

With that success, all the pent up anger which had accumulated over the years erupted and the massacres intensified.  Over the next couple of months, the Sioux Indians attacked and killed every white person in their path.  And as they heard the stories and their panic increased, the settlers began to believe - with good reason - that only God could save them.

The next town in line to be destroyed was New Ulm the largest settlement on the reservation.  Although there was probably little hope that they would survive a vicious attack, the settlers were not going to give up without a fight.  So, after gathering whatever tools or guns they could use as weapons, the townspeople formed a circle, in the center of which they placed their children whom they covered up as best they could.

As the warriors raced into town, half of them broke off to attack the settlers while the rest started setting fire to the buildings which served as businesses and homes. 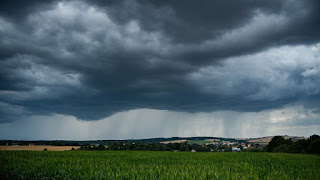 It was at that point that God seemed to say "ENOUGH"!   Heavy  clouds suddenly formed in the previously clear sky and let loose a torrent of rain on the burning town.  While the rain was quenching many of the fires, heavy smoke alerted settlers and militia in the nearby towns, who hurried to their defense.

Since they were well aware that they hadn't completely destroyed the town and its people, a much larger contingent of Indians returned five days later with the goal of finishing the job they had started.  But by that time, reinforcements had arrived who eventually were able to drive the Indians away.

Between those two battles, 190 structures had been destroyed, leaving only 49 residences to house 2,500 survivors.  Not surprisingly, the towns people packed up their few remaining belongings and left the ashes of their town behind until peace was restored and they could safely re-build the lovely town that stands today. 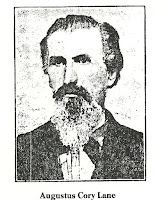 Ironically, the Fairbanks family had a part in the story. Family history says that they were living nearby and had witnessed the massacre and devastation of New Ulm.

The "Indian War" which began in August 1862 (thanks to the stupidity of four young braves) ended four months later after over 2,000 angry Indians had joined the fight, 392 were tried and 307 sentenced to death. The largest one-day execution in American history took place on December 26 when 38 Dakota warriors were hanged simultaneously in the town of Mankato, Minnesota. 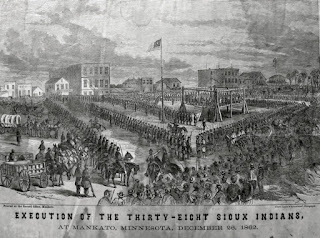 Ironically, Chief Little Crow, who had  managed to escape, was eventually recognized and shot to death by a local farmer.

After the war ended, the Lanes replaced their log cabin with a large comfortable home in Blue Earth, where they lived for 40 years and raised their five children.  After Elizabeth's death in 1904, Augustus first went to live with his youngest son, Charles,and then his only living daughter, Sarah, but never sold the home he and Elizabeth had built.  He joined Elizabeth 12 years later, and was buried next to her in the Verona Cemetery in Faribault County, Minnesota. 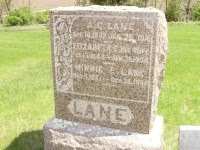 Posted by Unknown at 4:28 PM No comments: Links to this post