Penningsby Castle (shown above) was built in Roslagen, Sweden in the late 15th Century as a medieval fortress and, as you can see, it has survived through the centuries.

Olof Persson Stille was the son of Per Stille who managed the  Penningsby estate and - upon his retirement in 1627 -  was granted land on Humblö Island by the master of Penningsby.  It was on that island that Olof grew up and married in 1632. 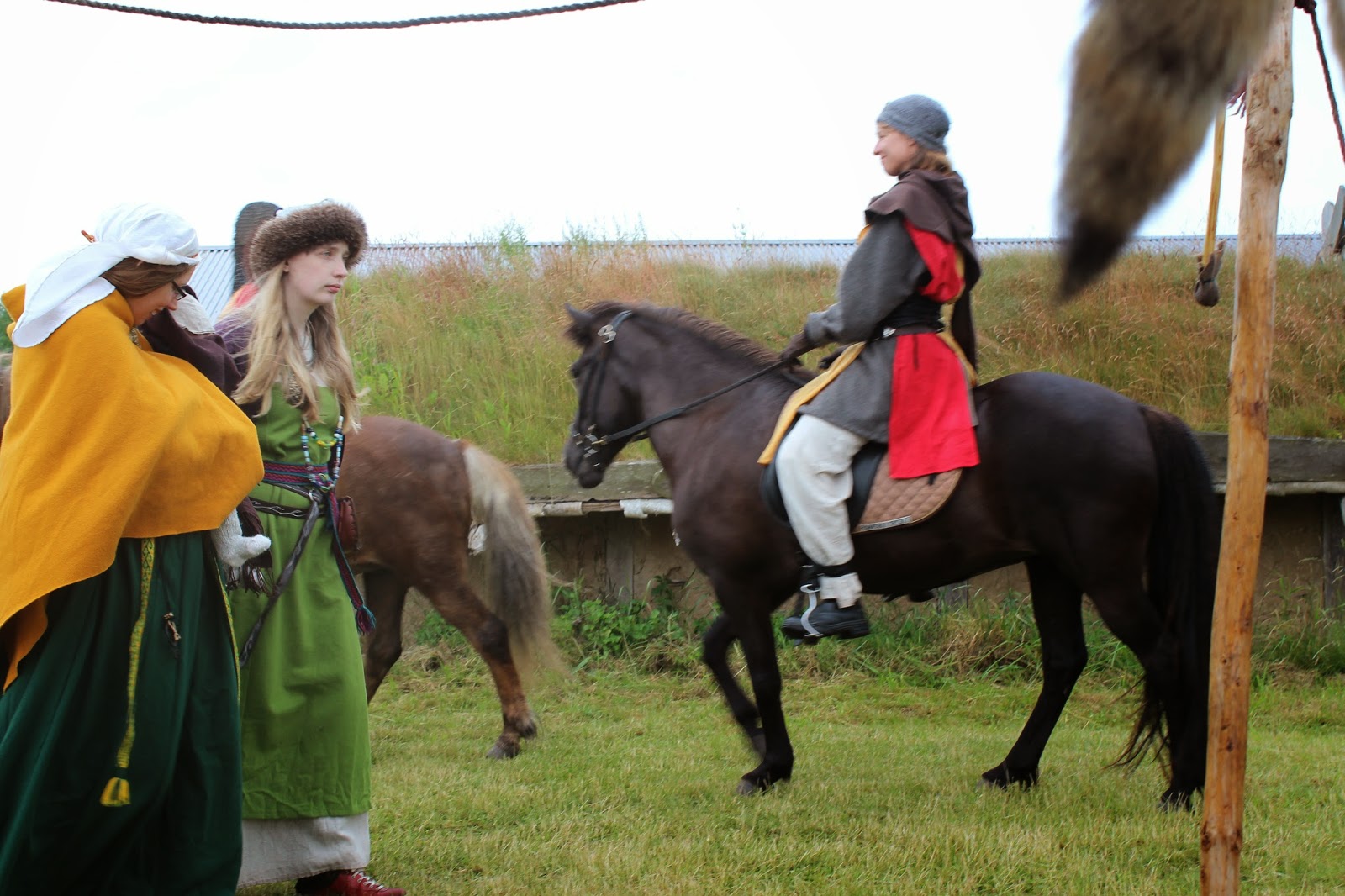 Although young Olof was on good terms with Erik Bielke, the master of the estate, he could find nothing good to say about Bielke's wife, Catarina Fleming, and evidently she felt the same. Tensions between  them escalated until, while attending a fair in 1636, Olof voiced his not-so-pleasant opinion of Lady Catarina once too often.  Of course his words soon traveled back to the lady, who retaliated by prosecuting Olof for defamation and ordered him evicted from his island home. 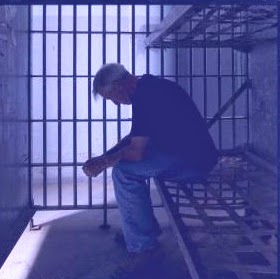 Not surprisingly, Olof refused to leave the island peacefully, and ended up being thrown in jail - which turned out to be a life- changing event.  Since he had nothing else to occupy his thoughts while sitting in his cell, he finally admitted that he might have been at fault and  reached the conclusion that it would be wise to find someplace else to live that would not be under Lady Catarina's direct control.

After finally securing his freedom, he followed through on the decision he had made in jail, and the Stille family packed up and moved to another town, where they were joined by Anders, their former servant.

But the lady of the castle, now a widow, was nothing if not vindictive, and obviously never forgot or forgave a perceived snub. After Olaf's move, Lady Fleming realized that she had nothing more she could hold over him. So she had Olof's friend and former servant, Anders, seized and imprisoned at Penningsby, claiming that he had broken a verbal agreement with the late Lord Bielke that he would be their servant.


On hearing the news, Olof sneaked into Penningsby Castle that very night by a secret door known to him since his childhood when he had roamed the castle freely. Using his axe, he broke the lock to the dungeon and then fled with Anders, who carried the axe while Olaf carried his own rapier.

Needless to say, that was the last straw for Lady Fleming!  She immediately complained to the Governor who, in turn, issued an order for Olof Stille's arrest on March 28, 1638  (the same day that the first expedition to New Sweden was landing in America).  At his trial on April 13, 1638, Olof was convicted of burglary and sentenced to death by sword!  Lucky for his descendants, the appellate court modified the sentence to a fine of 100 daler silver money (the equivalent of 17 months pay for a New Sweden soldier). 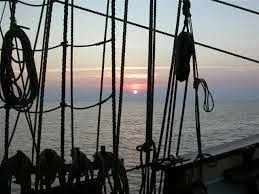 It took three years to make all the arrangements and book passage to a new land and a new life.  But in 1641, when the “Charitas” departed for New Sweden, the passenger list included Olof, a mill maker, his wife, 7 year old daughter, 6 month old son, brother, Axel, and the Måns Svensson Lom family, whose wife appears to have been Olof's younger sister.  His older brother, Johan, who was studying to become a pastor, and his sister, Kerstin, remained in Sweden.

After a stormy voyage, during which two colonists and a number of cattle died, the ship arrived at Fort Christina (now Wilmington, Delaware) in November 1641. There they were greeted by a handful of settlers who had preceded them to Sweden's three-year-old colony on the "South" (Delaware) River just outside of Philadelphia, PA.

Shortly after their arrival, Olof Stille settled in as a freeman in a plantation soon named “Techoherassi” by the Indians because of his heavy black beard which they considered a monstrosity.  This settlement consisted of three plantations, each with 12 "morgens" (25 acres) of cultivated land.  With him were his brother, Axel, and his sister's family. The Indians were frequent visitors to Techoherassi and liked Olof Stille well enough, despite the beard. 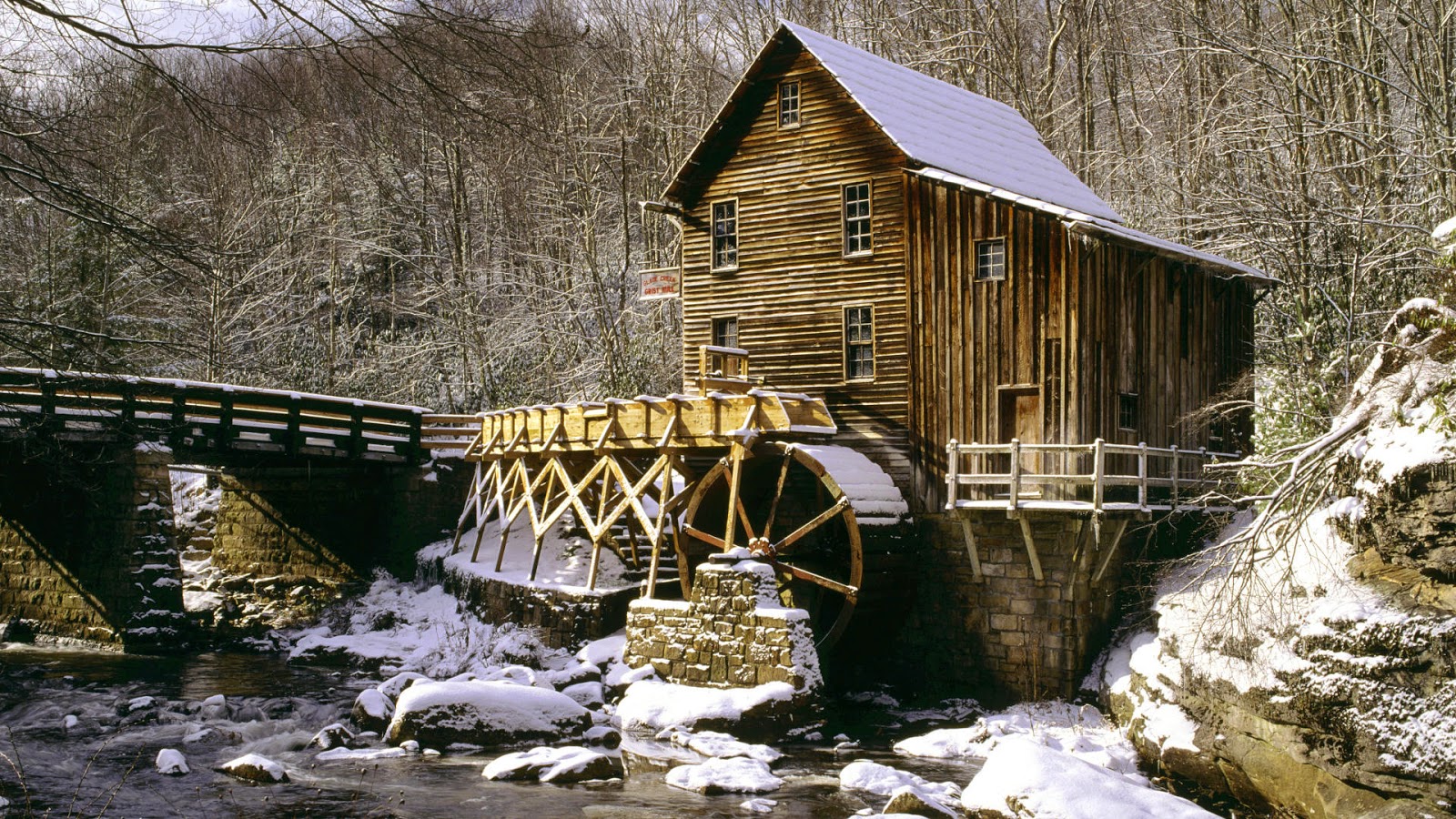 As the only known mill-maker in the colony, Olof  was probably in charge of building the first Swedish gristmill on Mill Creek (now known as Cobb Creek).


But his tendency to express strong opinions obviously had traveled over the sea with him and got him into trouble again. As a leader among the freemen, he played a key role in promoting the July 1653 list of grievances which was presented to Governor Johan

Printz and signed by Olof and 21 other freemen. This document protested Printz's dictatorial rule and the hanging of one or more vocal dissidents.  Printz did not take these criticisms well and considered those questioning his leadership as mutineers. His behavior seems to have been what would be considered today as passive-aggressive, since instead of dealing directly with the situation, he  promptly packed up and returned to his native Sweden.

To Olof, however, these settlers had done nothing more than simply exercise their right of free speech. When the new governor finally arrived, Olof asked for a prompt trial to clear up the matter. Fortunately, Governor Rising took a more kindly view of the freemen and let the matter drop.


In 1655, New Sweden was conquered by the Dutch. After their surrender, the Dutch governor, Petrus Stuyvesant, agreed to allow the Swedes and Finns living north of the Christina River to govern themselves, which was fortunate indeed. 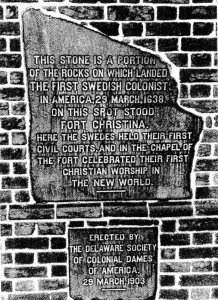 The first Swedish court, organized in 1656, had Olof Stille as its chief justice (yes - that man who constantly was in trouble because of his strongly voiced opinions!). During his eight years as chief justice of the Swedes' court, there were frequent policy clashes between the Swedes and the Dutch. Olof proved himself to be an able defender of the Swedes' position and usually prevailed.


After retiring as chief justice in 1664, Olof moved to Moyamensing (later called South  Philadelphia) with several family members. Even in retirement, he was called upon to arbitrate disputes among the settlers and his service was honored on both of these plaques. He died about 1684. 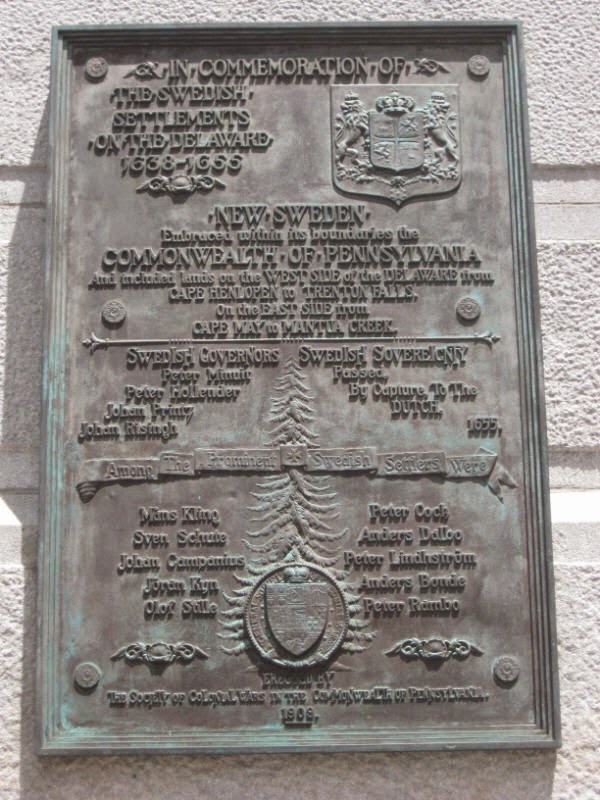 This story was an unexpected treasure for my sisters and me.   Finally, after years of believing that our family legends had their beginnings in the British Isles or Germany, a hidden treasure was discovered which proved that previously unknown Swedish ancestors had married into our German/American Custer line.  It was especially meaningful because after their marriage, our parents had settled in a Swedish neighborhood in Chicago where we attended a Swedish church, celebrated Swedish customs and my name was usually pronounced “Yu-dee” instead of “Judy”. We  were sure we didn't have a drop of Swedish blood in us. What did we know??

I am grateful to Dr. Peter Stebbins Craig, a Fellow in the American Society of Genealogists and a Historian studying Swedish Colonial Society, who published much of this paraphrased story in “Swedish Colonial News, Volume 1, Number 16 (Fall 1997).
Posted by Unknown at 9:51 AM